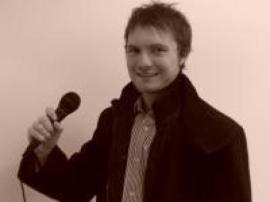 A cheeky and versatile comedian, Stevie Gray's act combines jokes, music, news stories and audience participation to create an up-tempo energy in any room
Stevie has been performing now for over 8 years and gets regular paid pro-gigs (20-25 minutes) from a number of promoters.