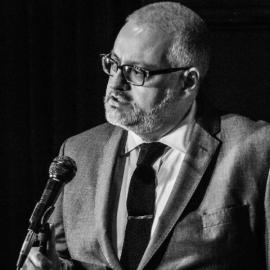 My stand-up comedy covers a mix of political and personal history.

I have 500+ gigs experience including 60(ish) performances of my two solo hours, Harun With A View (2016/7), and Dark Side of Harun (2018/9) at the Edinburgh Fringe (both full runs) and previews at other Fringes (incl Camden, Faversham, Brighton, Ludlow and Leicester and Bath Comedy Festivals).

I performed regularly at pro nights (around 50% of my gigs) including at Mirth Control Comedy Clubs, the Glee Clubs, the Stand-up Comedy Club, and Krater at Komedia. So far, I have also been booked for a few paid middles and opening spots. I also MC regularly, in the past at my own semi-pro night, the Happy Hour Comedy Night, now regularly at other promoters' open mic and new material nights.

My debut solo show, HARUN WITH A VIEW, has the following reviews:

"Musho'd has the makings of a great comedian. I would highly recommend it" ???? (Views from the Gods)

"When so many newer comics are Stewart Lee wannabes, at least this bears comparison to the original." (Chortle)

"A likeable and funny comic" (The Reviews Hub)

My 2nd show, DARK SIDE OF HARUN, had these reviews:

My third show, WHY I DON?T TALK TO PEOPLE ABOUT TERRORISM, debuted at Leicester Comedy Festival in February 2020 and played at the Much Laughter Comedy Hub in Rochester, on 8 March before my comedy career, like others, took an enforced rest (but have been gigging again since July).
Please Sign In or Sign Up to add a comment