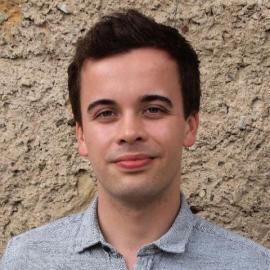 Writer and stand-up comedian Will Dalrymple broke onto the student comedy scene in Cambridge in 2013 as one half of a musical comedy duo - described by The Tab as 'A modern Flanders and Swann' - and became a regular fixture at comedy nights across Cambridge. He also dabbled in sketch comedy, performing alongside the Cambridge Footlights at their comedy 'smokers' at the ADC theatre, and co-writing and performing in his own sketch show And Then There Were Nuns in November 2015.In 2016, for his own amusement and to celebrate his own spectacular exit from the closet, he began writing 'Man to Man', a series of explicit parody gay literotica novellas, which were published online and swiftly took Cambridge University by storm. Extracts from 'Man to Man' were fashioned into stand-up sets which he performed throughout 2016 and 2017 in Cambridge.Following his graduation in 2016, Will and his frequent collaborator Mark Bittlestone took 'Man to Man' and Mark's stand-up material and fused them into the split-bill stand-up show 'Pity Laughs: A Tale of Two Gays', which played for the entirety of the 2017 Edinburgh Fringe to great acclaim and delighted horror (see: explicit parody gay literotica). Will has now moved to London and has begun performing on the South London stand-up scene. At his first London gig he won the Comedy Virgins award at the Cavendish Arms, and has now peformed at the Savoy Tup, The Joker in Angel, The Bill Murray (as a reprise of his Edinburgh Show) and he now co-hosts a monthly comedy night in Clapham