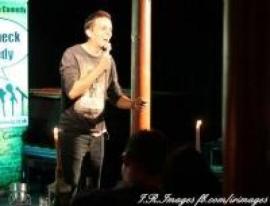 Ross is quickly climbing the comedy ranks, Having beaten the infamous Gong at the Comedy Store on his first attempt and coming 2nd in the Comedy Cafe's new act night Ross has already found himself supporting industry heavyweights such as Jo Brand, Sean Walsh, Bob Mills and Patrick Monohan and recently has been booked as official tour support for Russell Kane playing in front of audiences as big 1600.
He's been lucky enough to perform several times at some of the country's most prestigi