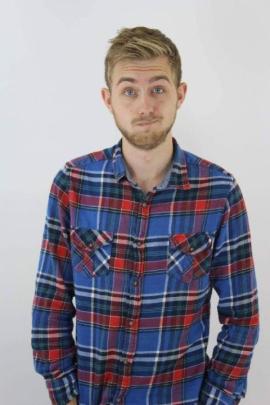 Gags, puns and weirdness all wrapped up in a lumberjack shirt. Some call me the goose whisperer (I can do a goose impression).

Martin specialises in quick gags, one liners and thrives on audience interaction.
Is a regular contributor on BBC New Comedy show.
Has supported Carl Hutchinson and will support Gary Meikle on their Norwich tour dates.  Has brushed shoulders with Hal Cruttenden, Tanyalee Davis, Bobby Mair, Tim Fitzhigham and Simon Brodkin to name but a few.

Martin is also the regular MC at Hooma Comedy Club in Norwich which holds regular comedy nights in the up and coming comedy circuit within the city and surrounding area.

Martin has done paid 20's for LOL Comedy Club and Much Laughter. Open spots for WBC. And paid closing spots at up and coming comedy nights. His 2018 show 'Ats Entertainment sold out at Faversham Fringe and is currently working on the next show.

I have recently been signed by up and coming agency 88 Management.

"Martin asked me for a quote and I said yes... Saw him, liked him, hope he gives up soon before he starts costing me work." Gary Delaney

?Can handle a crowd and has funny bones.?
Janey Godley

"Reliable and definitely worth booking - I'm happy to see him on a bill."
John Mann