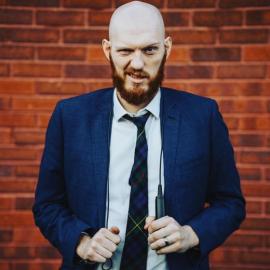 An up and coming comedian with a medically certified giant personality. Booking Kent is a safe pair of hands- literally you won't find a bigger pair on the circuit.

“Kent Cameron takes to the stage and has the audience in his grasp within seconds. One to watch and pleasure to book”.


"Kent Cameron is a relative newcomer to the comedy world but is really starting to stand out in a crowded market; a very engaging performer who really connects with an audience with his diverse subject matter including self deprecation and his Scottish roots; coupled with his ability to think on his feet and react to audience banter he looks set to really start moving up the comedy ladder in the next twelve months; comfortable with a diverse demographic he appeals to a wide range of people which is a real advantage as it allows him to play to an equally wide range of clubs."


"Kent Cameron fills the stage like a gentle giant. His writing and delivery are all on point with lots of very funny jokes from a unique perspective. Likeable, engaging and entertaining. A strong addition to any lineup. Highly recommended "

"he hit the stage like Taz and presented 27 minutes of gold. You'd have thought it was packed if you listened in.

Molasses is now closing but if I do any more gigs he'll definitely be booked by me."