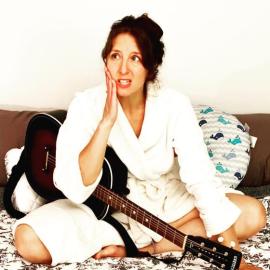 Mom. Comedian. Momedian. Award winning, longtime mid Atlantic based stand up and musical comic. Songs on Apple Music, Spotify and everywhere!
Performs hour long solo show or shorter sets at clubs, parties, shows, colleges and festivals across US and UK.
#1 bestselling Amazon joke book, “Dumb Jokes For Smart Folks”.
Creator and host of The Mom Report on WABT Pocono 96.7 FM, every Monday at 7 am. Playback link on Facebook.com/groups/TheMomReport.
Produces 2 ongoing shows in the Poconos:
Comedy In The Gap at Sango Kura (next show, Fri Dec 16, 2022)
and
Coffee and Comedy Mommy and Me comedy show (next show Jan 21 at Bloom Play Space)
Book me / get in touch:
jessdelfino@gmail.com
More about me:
Wikipedia.com/wiki/jessica_delfino

“We were immediately stuck to our seats stunned and smiling as Jessica Delfino engaged us in tune after tune…She is funny. And smart.” –Thurston Moore & Byron Coley, Arthur Magazine

“Jessica Delfino has one of the funniest bits I’ve ever heard…smart, socially aware comedy.” –The Huffington Post

“Comedian Jessica Delfino is a guitar-playing, hilarious-joke-telling, do-it-all performer, as well as a critically acclaimed and award-winning musician who has performed her cheeky comedy songs everywhere from Good Morning America to the U.K.’s Reading and Leeds Festivals. Who wouldn’t want to see this comedy rock star take the stage?” –BUST Magazine

“Ms. Delfino’s songs are expositions on a range of topics...like how having a baby would wreck her body.” –The Wall Street Journal

“Some of the most genius comedy you’ll see all year.” –New York Blade

“Jessica Delfino is a comedian-songwriter…Delfino sincerely strums her guitar in time to funny lyrics with a well-practiced deadpan.” –The Onion A.V. Club

“Let me be absolutely clear about this, without any exaggeration: If you had to pay one live human baby in exchange for a ticket to her show, it would be worth it. More than worth it. . . . The songs are written and performed by Jessica and are hilarious. They’re so funny that no word exists to describe them.” –The Triangle, The Student Newspaper at Drexel University, Philadelphia

“Critics’ Choice…Supremely witty…smart and edgy…we’ve been playing this quirky New York songsters album ‘I Wanna Be Famous’ all week and can’t wait to see her live.” — Time Out London

“The attractive female comedian who grabbed the audience’s attention from her entrance, Delfino has a way of making you hang on her every word…She turns the taboo into feminine and empowering subject matter.” —The Portland [Maine] Phoenix

“Jessica is not the only the guitar welding comedian, but she may be one of the most original.” –Kernan Andrews, Galway [Ireland] Advertiser

“I love her. And when I say love, I don’t mean in a stalking-creepy way, I just find her hilariously funny.” –vox.com

“Hilarious and irreverent . . . . Jessica is a Master . . . . This critically acclaimed comedic musician has performed her quirky comedy songs all over the world” –The Somerset [U.K.]Guardian

“The Most artistically provocative show at the 2009 Edinburrgh Fringe Fest. . . . Jessica will no doubt soon be a household name. . . . Jessica is an absolute stunner.” –USA Weekly News

“Lucky for us, Jessica Delfino has a new album out today and it features “Christmas Idiot,” which has to be our favorite new holiday song.” —NYPress