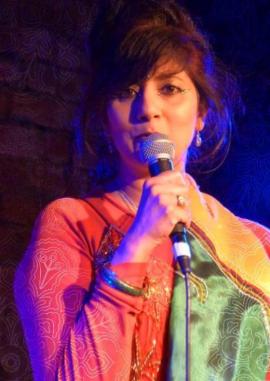 Stand Up Comedy
Observational / alternative / friendly
'Energetic! Charming! Full of positivity!�?� Female arts 'Engaging Raconteur!�?� Three Weeks
'Side splitting! Rib tickling!�?� Loughborough Echo
'Ishi may be small but her energy & positivity certainly makes up for it! You come out feeling uplifted!�?�
Nottingham Comedy Festival
'Finishing off the night was the very fun Ishi Khan- Jackson. The

Formally, Ishi has been performing comedy since 2008, when she set up a regular comedy cabaret night. She was the resident compere of 2Funny Comedy Cabaret Nights, empowering emerging acts by placing them on the bill with more established Comedians like Sarah Millican, Gary Delaney and Patrick Monahan.
While running 2Funny Comedy Cabaret nights, she enjoyed gaining valuable skills as a promoter, event manager & bouncer :)
In reality, Ishi has been making people laugh since she was born. She came out crying & they all laughed!
Ishi's first comedy performance was at 5 years of age at Primary School in Zambia.
She took to the stage before a Zambian school assembly of nearly 1800 pupils and teachers. Here she sang one of her grandma's favourite Amitabh Bachan Hindi songs, which was so lost in translation in Zambia that it caused a roar of laughter! Instead of running off in tears, she carried on till the end of the song, happy to be causing hilarity.
She has enjoyed a captive audience of over 800 on the Red Sea. All aboard Thomson Spirit.
Ishi has been honoured to be a support act for Signatures (Britain's Got Talent), Sarah Millican; Mock the Week's Dara O'Brian; John Hegley; Peep show's Isy Suttie; Paul Foot, Patrick Monahan, Suzy Bennett, Shazia Mirza, Brian Damage & Krystal & Gary Delaney.
Theatre
Lead role, East Side Kahani at Loughborough Town Hall
East Side Kahani was based on West Side Story with a Bollywood slant. Ishi also choreographed a dance, assisted with script editing, sourced & funded her own costumes. http://bit.ly/1nIsiXL Lead Role of Aladdin in Aladdin, Feb 2012 (http://lborofaiths.org.uk)
Compere for Bollywood Comedy Night, Curve Theatre
Kahani Sapno ki, as part of the ensemble, Curve Theatre, Leicester
Improvised comedy at Belgrade Theatre, Coventry
Radio
Had fun making Tony Sandhu LOL on BBC Asian Network
Oak Fm co-presenter on Asian Connections with Deedar Bahra
Occasionally pops into BBC radio Leicester for a discussion on her shaving habits with Damien and more regularly to tickle Rupal Runjani! http://www.bbc.co.uk/programmes/p00y89sg
References & feedback
"...Excellent! . We loved Ishi's contribution at The International Women's event . It resonated with the entire audience!" Dr Lorna Cork http://drlornacork.com
"Ishi ' thank you. I was delighted! feedback on the show has been wonderful!" Lynne Parker, Producer of Funny Women Ltd., Organiser of comedy Showcase for Pan Asian Women's Association at London's Asia House. www.funnywomen.com
"Ishi Khan-Jackson performed to a wide audience of over 100 women at International Women's Day. She engaged with and entertained women of all ages, backgrounds & cultures, who loved her comedy!" Varsha Parmar, Development Officer for Human Rights & Equalities Charnwood
'Funny! Enthusiastic! Energetic and engaging! Infectiously entertained the audience from beginning to the end! Impressed with her energy. I will not hesitate to use her services again. Ghartey Vardon Leicestershire County Council. Black Workers Group Conference, Athena, Leicester.
Please Feel free to contact any of the above for a reference :)


Ishi says, 'freedom is one of the things I love about the UK. Open your hearts, lift up your souls and laugh freely!�?�