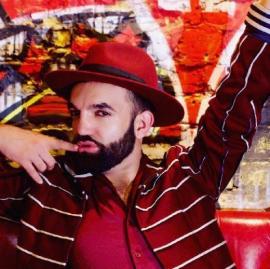 Over 100 gigs since starting in July 2019.
Opened for Shazia Mirza, Simon Munnery, Boothby Graffoe, Jeff Innocent, Kae Kurd and Chris McCausland.
?Outrageous, daring and smutty, he got big laughs from the late-night crowd.? - Richard Gill
?A level of energy and aplomb that leaves audiences dazzled with laughter.? - Big Comedy

I began performing on the circuit in July 2019 and have compeered at 'Downstairs at The Kings Head', and MCd for Big Comedy (pro night), Covent Garden Comedy Cellar, and I compeer every Sunday at Instant Laughs. I have headlined at numerous open mic gigs in London including TNT Comedy and Sam Rhodes Comedy Explosion. On the pro circuit, Ive opened for Shazia Mirza, Simon Munnery, Boothby Graffoe, Jeff Innocent and Chris McCausland. Being British-Pakistani, Muslim and working class; I?m a Londoner that ticks many diversity boxes alluding to foreseeable hate crimes; but this also happens to inspire some profoundly unique anecdotal gags, very unusual stories and hilarious autobiographical material.

I beat 'The Blackout' at 'Up The Creek' (Greenwich) and beat the gong at 'Spiky Mike's Fun House Comedy' (Leicester). In July 2019, I completed a stand-up comedy course at The Comedy School (Camden) at the top of my class. I have since studied acting, clowning, sit-com writing and compeering; and I?m always actively working on improving as a performer. I have been a performance artist for the best part of 20 years. I?ve hosted countless club nights and private events and used to host a regular cabaret event at 'The Old Blue Last' (run by Vice.com) in Shoreditch.

Outrageous, daring and smutty, he got big laughs from the late-night crowd. - Richard Gill

Headlined at: TNT Comedy @ The Vine,Sam Rhodes' Comedy Explosion @ The Rocksteady,JEST Another Comedy Club @ The Crown.