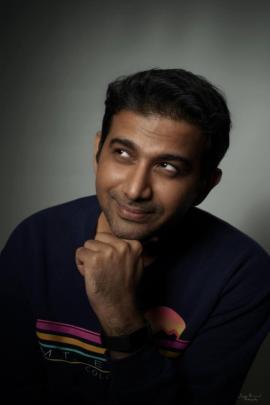 Arun Rama is a comedian from India. He started out in the vibrant DC comedy scene before he moved out to the Dallas area and ever since has been regularly performing at clubs and shows all over the South.
He harbors a unique fish out of water perspective on life, love, and everything in between that leave audiences thirsty for more. His one of a kind perspective will have your attention and will leave you in splits. He makes the taboo, tantalizing and the controversial, comedy.
He has worked with nationally-touring headliners such as Greg Proops, Mark Normand, Phil Hanley, Greg Hanh, Chris Franjola, Kevin Bozeman, Vince Morris, Ahmed Ahmed, Amir K, and many more. He has been featured in the Plano Comedy Festival, Dallas Comedy Festival, and Tower City Comedy Festival.
You can follow him everywhere on social media:
@arunformylife