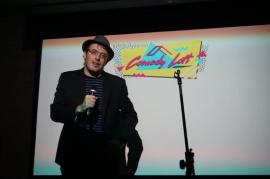 I am a tall, dark, sardonic fellow with a trilbee and unique perspective on modern life.I point out the absurdities of life and culture. And maybe tell some jokes.

Charlie Barnes wore a hat (a greatly under-used item of clothing) and started off on his terrible life so far, which rather reminded me of Frankie Boyle. Although Charlie didnt go to the disgusting lengths that Boyle has been known to, we were all told of how ridiculous it was that when we had a girlfriend or boyfriend, we talked about seeing them. He finished his performance with the quip, I see people every day and I dont have sex with any of them! His ingrained social awkwardness, which was clear to see from the beginning, turned out to be the basis of his humour. This occasionally led to awkward jokes, like when he talked about how much he hated school, but mostly showed how ridiculous human interaction can be sometimes, such as his parody of what its like in a Bristol nightclub. The audience was really enjoying it and there was much laughing out loud.

"Charlie has Aspergers. He delivered some good lines, he had clearly been polishing his act! Very likable fella!"
Trish Caller, Genius PR and Events.
https://www.geniusprandevents.co.uk/2018/01/27/stand-up-for-cider-2018-heat-1/

Graduate of the Comedy School in Bristol, 2016.

I have also performed heats at:
. Stand Up for Cider, Taunton.
. The Laughing Horse New Act of the Year.
. The Golden Jester Competition.
. The South Coast Comedian of the Year (finished 5th out of 6).
. The Reading Comedy Festival.
. The Bath Comedy Festival.
Please Sign In or Sign Up to add a comment

New Comedian of the Year

Tilt at the Windmill

So You Think You're Funny