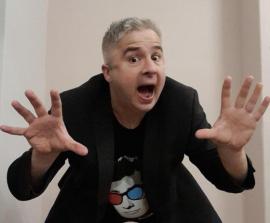 Bio
Yorkshire lad doing quick fire gags and gigging since 2016. Regularly middling on pro bills and increasingly doing weekend work.
For example in the last couple of months I've opened on Saturdays for ROFL's Derby, Newcastle-under-Lyme and Sheffield venues - and middled for Shoecake in Leeds, for Rob Riley's Off the Rails club in Saddleworth - the middle act between Daliso Chaponda and Rob Rouse.

As seen in the Daily Telegraph’s 25 Funny Jokes For Lockdown and more than 3 Million views on Facebook Reels.

I drive. Based in Wirral, Merseyside.


'Ben smashed it. Big punchlines and great audience interaction,. You should book him,' - Joe Zalias, booker and MC - The Comedy Shop, Barnsley

'Opening our show, Ben performed with a perfect mix of great wit and a relaxing stage presence, he charmed the audience from start to finish. Thoroughly enjoyable set, he was a delight to watch,' - Small & Shouty Comedy Club, 2021

‘Audience loved him. Got big laughs,’ - The Stand, Newcastle

‘Very club-centric material/feel with some nice dirtier jokes along the way. All the stuff is there.' - Glee Comedy Club.

'Brilliant. It’s tough to make an insolvency company laugh, but he did' - comedian, actress and promoter, Pauline Daniels

Awards
Barking Mad East Midland New Comedian of The Year 2019 runner-up, World One Liner Championships 2019 finalist and a previous Comedy Cellar Yorkshire New Act of the Year finalist.
Please Sign In or Sign Up to add a comment