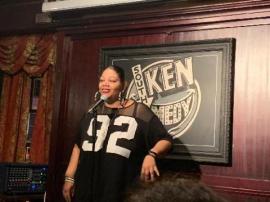 French, mixed race, overweight and simply fabulous; I bring it to the stage with stories on relationships, my background and views on what is going on

This French-Ivorian has an authentic voice in comedy, an incredible stage presence and hilarious jokes: a definite force to reckon with.
Punchy, blunt, accessible, Arielle Souma performs with a distinctive style for major clubs like The Stand, Glee Club, Top secret, Angel comedy club ...

« Her delivery is really strong  and lively, she?s brilliant fun and totally commands the stage. She killed it and totally raised the roof. Clearly very accomplished, she just has it. »
_ The Stand Comedy Club

? So much charm & ebullient, always smashes her spot. The audience love her? _ Leo Kearse

? Rips the roof off every time. Dynamite performer? _ Scott Cappurro

" Arielle Souma is the hilarious new kid on the block! The audience loves her straight talking style and her daring blue material. One to watch! " _Tiemo, talk of the city