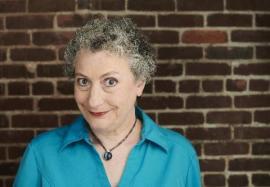 Performed at Zanies and Laugh Factory in Chicago, Flappers in Burbank, Improv and Comedy Store in LA.

I'm a middle-age single woman who is definitely nobody's mom. I'm your best nightmare: a fearless feminist atheist with a sharp sense of irony who will challenge your assumptions about older ladies, while still relating to all ages. Ive played bars, bookstores, basements, and barns, and whatever youve got, Ill play there too. I have 14 years in comedy...not in a row. In my previous life I hosted a ton of shows and was just starting to feature when the 90s comedy boom ended. I started up again two years ago and Im working my way back out on the road.

In my past life I played clubs and colleges across the midwest and east coast, including many great comedy clubs that don't exist anymore (including at least one that literally burnt down). I opened for Paula Poundstone, Gilbert Gottfried, Jake Johannson, and many non-alliterative comedians as well. How long ago? I once hosted a show with a young feature named Patton Oswalt. Yes, feature. It was a long time ago.

I took a break from standup to go to the Second City Conservatory for improvisation and sketch writing. I also studied at the Annoyance Theater and ComedySportz, and bounced around doing a bunch of improv stuff.

Then in September of 2015 I had an epiphany and remembered I was a standup comedian. In my current life I perform around the Chicagoland area and a few places in LA, where I'll live as of July 2017. I've showcased at Zanies in Old Town and Rosemont, the House of Blues Foundation Room in Chicago, The Comedy Bar in Chicago, Flappers in Burbank, and Comedy Clubhouse in LA.