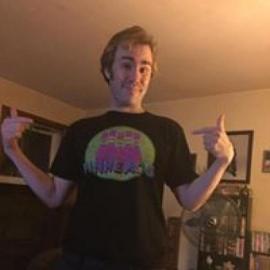 Alex deCourville is a man of many talents. In addition to being a comedian, Alex is the star and creator of the show Pinheads. Pinheads isn't Alex's only project. Other career highlights include short films such as Terminal and Highway to Hell as well as feature films such as Research: The Musical and Herbert and Mabel Get a Prostitute. Among all these projects, Alex has a shown a wide range, sometimes playing silly goofballs, but also playing characters with dark, disturbed intensity.
As a comedian, he is known for his absurdist humor and impressions of celebrities such as Bob Dylan, Bernie Sanders and Alfred Hitchcock. Whether he's talking about video games, dating or reading off his list, Alex always brings a bizarre look at the things we do every day.