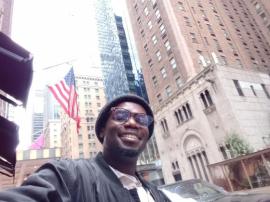 Hello my name is Bradley Cobb and I'm a Stand-up Comedian from
St. Louis,Missouri. I love being able to spread love and joy to laughing. Hopefully I will have the opportunity to do that for you and your guest.retty love enjoy through laughter. I appreciate the opportunity to be able to entertain you and share a moment of happiness with all who attend. So if you are in the market for a funny, entertaining, thought provoking, and down right fun. So please contact me anytime @ 314-675-8809. Thank you and have a great day.

I'm currently co-starring in a documentary film called the "Gumbo Coalition".It's a Civil rights documentary ,in which I was followed for 3 years The film was produced by Cabin Creek films. I have also toured performing comedy all over the country . I have also had the pleasure of performing @the Funny Bone in St Louis three times.
Please Sign In or Sign Up to add a comment