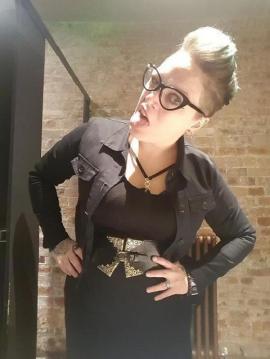 Vicki has been performing on and off since she was 9 years old. She has been the MC for various Tattoo conventions in the South of England for the past 4 years however Stand up comedy was calling her and had been for a long time.
Fast forward to today and she is a regular on the South Coast open mic comedy scene and 2020 has seen her career start to soar. She is the resident MC for House of Comedy Ltd and has supported Cally Beaton, Hal Cruttenden, Paul McCaffrey, Elliot Steel and Milo McCabe aka Troy Hawke. Her comedy reveals hilarious uninhibited stories about her life, ranging from how alcohol is not the answer to being a Mum to a toddler and 4 step kids, to her past life choices and outcomes.

“Vicki is warm, funny, brave and loveable, on-stage and off. Look out world!” Cally Beaton
“Has the stage presence of the late, great, Tommy Cooper.” Gabby Killick’s Mum