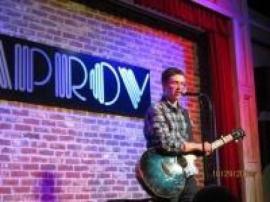 I am a 20 year old from Atlanta who plays guitar and sings funny songs that I write. I fell in love with performing in Freshman year of high school when I joined theater, I was an awkward nerdy kid who was bullied so the place I would go to escape that was the theater where I would go on to act in multiple plays at the school. That got me confident being on Stage. February 18th, 2013 is when I wrote my first comedy song and decided that stand up comedy is what I wanted to do. I am a Paramedic